A dozen or so colorful cruisers are waiting in front of Washington Square Park. Cassady Fallon Cooper is the owner of A Bicycle Named Desire and guides the tour. He’s a lively guy who seems like he’s read every book on New Orleans.

Guests hop on the bikes and cut through the Marigny toward the first stop: the Elysian Fields bridge to Crescent Park, which looks over the river, the destination of so many traders years ago. Cooper says that Bayou St. John, the Mississippi River, and the strip of dry land between them are why Jean Baptiste Le Moyne de Bienville chose this place. The French explorer founded the city in 1718.

“Bienville’s dilemma was finding a spot to build along here,” says Cooper, gesturing toward the riverbank. Esplanade Ridge was the answer. The dry strip of land — about a foot and a half above sea level — provided a kind of bridge between the river and the lake — a portage for traders bringing furs and ammunition to trade with Native tribes.

“It was so much easier to come up through the lake than it was to come up the mouth of the Mississippi River before steam engines,” explains Cooper, “so that was the deciding factor.”

We ride down Esplanade, stopping just past Claiborne, in front of a mansion. “I want to think about what happened right here along Esplanade that kind of decides where our city could be, where our footprint could be,” says Cooper. He points to the Dufour Baldwin Mansion. “It was built by the Dufours, but then it was in the Baldwin family, and the son of the Baldwin family that had it was Albert Baldwin Wood.  Anyone know who this is?”

Several tour participants call out in unison: “Yes, the guy who made the pumps!”

Albert Baldwin Wood’s 1913 invention of the wood screw water pump let the city drain streets and swamps. We still use these pumps today. “He allowed the expansion of the city into different areas,” explains Cooper, “which changes where you could be, and it pushed the city further out.”

The house of a pump inventor might not be as titillating as the haunted houses of the Quarter, but New Orleanians know how important the pumps are, and that’s the whole point of this tour. The city’s tumultuous relationship with water has also inspired artists and inventors.

Crossing Bayou St. John into City Park, we bike along the pond to see a crude bronze sculpture of a wave jutting out of the water.

“This is by Lynda Benglis…,” Cooper tells us. “She had in the ’70s begun building waves…It was part of a contest and won to be presented at the World’s Fair.”

The 1984 Louisiana World Exposition was all about water, with the theme “The World of Rivers” and a gondola carrying visitors over the Mississippi. But ticket sales fell short, the expo went bankrupt, and this sculpture was part of the great liquidation. Purchased by a businessman, it spent decades at a Kenner sewerage plant before ending up at City Park.

The tour itself is resurrected artwork. It’s based on one the late architect Allen Eskew gave before his sudden death in 2013. With the city’s tricentennial approaching, his companion, artist Babette Beaullieu, wanted to share his love of the Portage with others, so she phoned his old office, Eskew + Dumez + Ripple.

“Well,” recalls Beaullieu, “I began by calling Eskew, Dumez, and Ripple’s firm and asking, ‘Can I have the notes of Allen?’ So it started with those notes.” 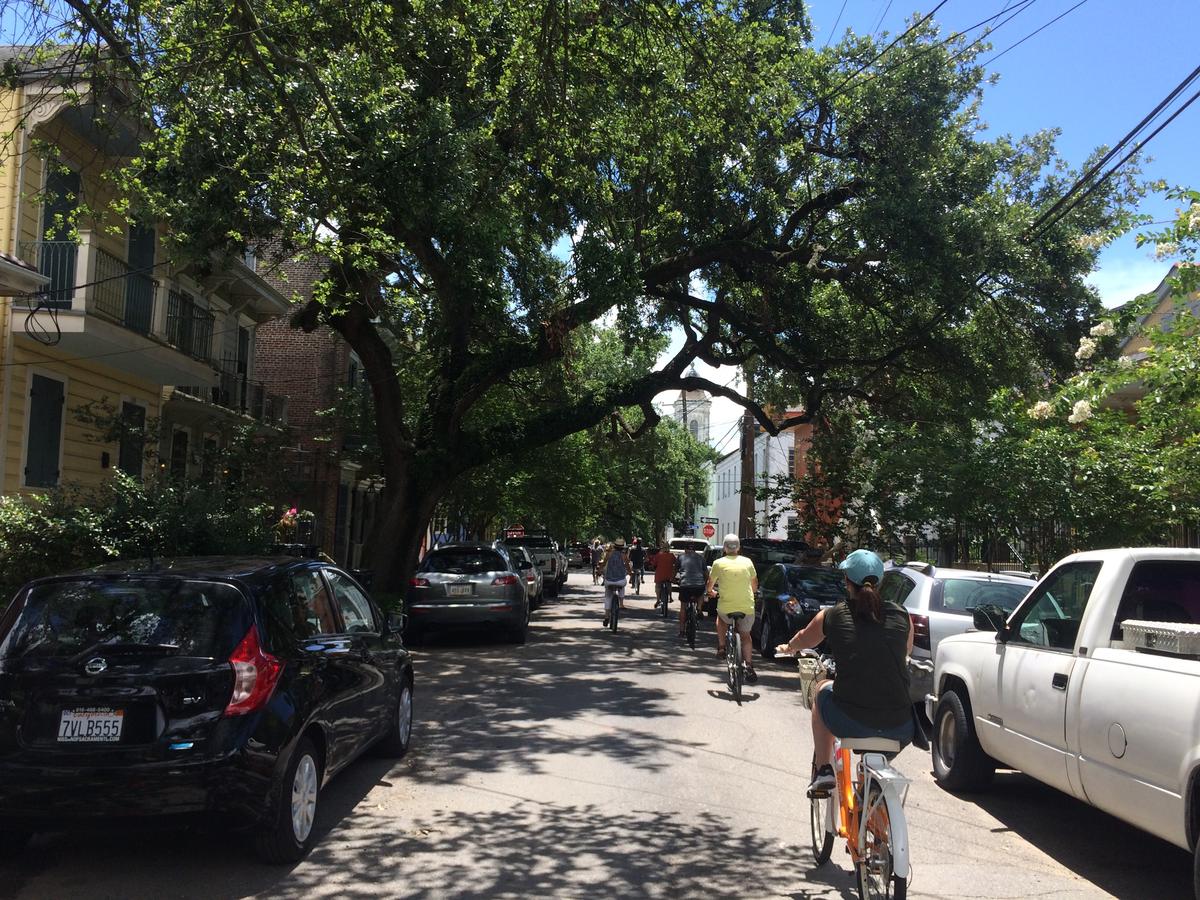 Other tour stops include Lil Dizzy’s restaurant, the Joan Mitchell artist retreat center, and the now-shuttered New Orleans African American Museum. What do they all have in common? A foot and a half of elevation. It’s easy to forget why people built here though. A few of the bicycle tourists say they had no idea.

“It’s really fascinating to see how these are sights that we pass everyday in our cars, but you never really connect it to what really is the foundation of the city, which is the river, and how the people then and the people now are still dealing with it,” says Gentilly resident Terri Baquet.

As we uncover the reasons behind those architectural features, we catch a glimpse of what’s now invisible: the distinct geography that made this route so valuable three hundred years ago.